The Ruins that are Not 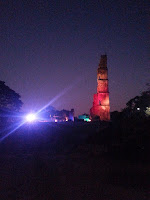 A large crowd had gathered for the Western classical music concert at the remains of St. Augustine’s in Old Goa on 7th January, 2016. Was the gathering purely one whose purpose it was to witness a musical performance, or was the fact that it occurred at a historical location itself symbolic of something more? Or is it that the congregation in great numbers was a performance in itself, a gathering to assert Goan identity, which the place and the music is emblematic of. 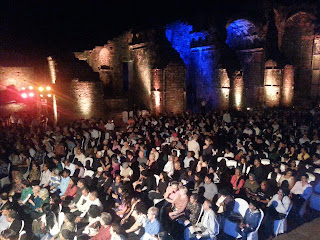 The music concert was held in the Church of Our Lady of Grace which is a part of the Augustinian monastery built in late sixteenth century. The Church was vaulted single-nave, with inter-connecting lateral chapels and had two tower façade. Architectural historian Paulo Varela Gomes writes that the Augustinian church’s more enduring contribution, indeed ground breaking for the architecture of Goa, resided in its main façade: it was the first church in Goa with a two tower façade, a type normally reserved for Cathedral churches that only the Holy See had adopted. It seems, subsequently, practically all parish and convent churches would have two towers. The highly visible landmark, a 46 meter high tower, built in locally sourced laterite stone, once served as a belfry and formed part of the façade of a magnificent Church. 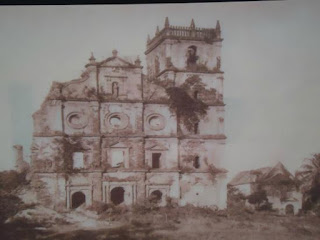 The entire site is in ruins today, and the remaining tower of the Church façade hints at the glorious edifice that once was. In the book Imperial Debris: On Ruins and Ruination (2015), its editor Ann Laura Stoler proposes two ways of understanding the concept of ruins. She writes that “[r]uin is both the claim about the state of a thing and a process affecting it. It serves as both noun and verb. To turn to its verbal, active sense is to begin from a location that the noun too easily freezes into stasis, into inert object, passive form” (p.11). There is no doubt that St Augustine’s Church has achieved far greater fame because it is a ruin (as a noun). In many ways, the surviving tower is also symbolic of what remains of the once dominant Catholic culture. Stoler suggests that ruination is more than a process that ends up with building debris as a by-product. As per her, ruination is also a political project that lays waste to certain peoples, relations, and things that accumulate in specific places. The aftermath of such ruination invites visits by archeologists, art and architectural historians and, at best, tourists, notes Ronald Schulz, in his review of the aforementioned book published on H-Empire (February, 2015). In effect, then, ruins are rendered monumental, fossilized in time. There is something similar happening to colonial architecture in Goa as much as to the Goan Catholic culture it represents - both have become objectified in the way in which people from the rest of India look upon them through a touristic gaze, as if the place and its people were in a museum.

It is here that I find Stoler’s concept useful, that “[t]o ruin [as a verb]…is to inflict or bring great and irretrievable disaster upon, to destroy agency, to reduce to a state of poverty, to demoralize completely" (p.9). The events that are unfolding in contemporary Goa seem to suggest that the Goan Catholic community is subjected to ruin through the undermining of its agency. This is because the dominant Brahmanical culture problematically characterizes Goan Catholic communities as native-managers and the sole beneficiaries of the erstwhile Portuguese colonial order, which in turn marks them as anti-national.  The Catholic community that produced a unique identity for Goa is thereby made to suffer the sins of an imagined ‘imperial’ past where Portuguese colonialism is rendered as being no different from British imperialism. Accordingly, Goa’s history is reduced to a small blot, to an undifferentiated and righteous Hindu-Indian past that rescued itself from the clutches of evil imperial oppression.

What is conveniently obscured is that the history of the Portuguese empire in Goa led to the emergence of a unique local culture which was epitomised by the development of church architecture. In his book Whitewash, Red Stone: A History of Church Architecture in Goa (2011), Paulo Varela Gomes asserts that churches after the sixteenth century had “far less Portuguese influence than one would be led to believe” (p.4). Architectural practice during the colonial period in Goa assimilated global ideas and elements to create a unique local architecture, Gomes asserts. More importantly, in participating in the Renaissance and the Baroque styles of architecture, Goans were also contributing to global architecture. This is to say, they were producing modern aesthetics in their buildings, and therefore fashioning themselves as enlightened world citizens. It is this cultural heritage that contemporary Goan Catholics continue to hold on to.

The large gathering of Goans at the Western classical performance at what remains of the Augustinian complex is an assertion that they have not given up on the markers of their culture, the monuments, as much as the music. For these reasons, St. Augustine’s cannot be classified as a ruin just yet; the site is still an active monument, even if only a part remains.

[This article first appeared on The Goan Everyday on 31 January 2016]
Author Vishvesh Kandolkar at 08:15:00